A native of Rio de Janeiro, singer Veronica Nunes, daughter of a 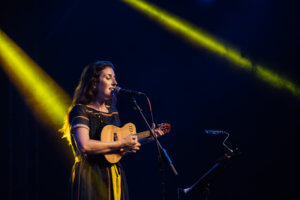 classical pianist, grew up in a musical environment listening to traditional Brazilian styles such as samba, choro and classical music. Since the age of fifteen Veronica has has been a professional musician.

Nunes studied music at the Brazilian music school EPM, founded and taught by masters musicians of choro music, a traditional Brazilian style precedent to samba. At EPM, Veronica studied voice as well as the guitar and cavaquinho, a Brazilian version of the ukulele, traditional to samba and choro music.

In 2009 she moved to New York and became a member of the famous New York – based Brazilian band, Brazooka. For the past ten years the band has been performing at the legendary club Cafe Wha in the Village, club that used to host stars like Jimmy Hendrix, Janis Joplin and Bob Dylan.

At Brazooka band, the singer met the talented Brazilian guitarist and composer Ricardo Vogt and the two decided to collaborate and record an album together. 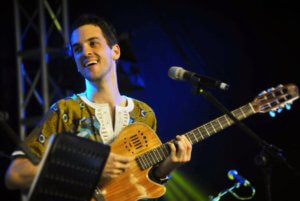 Ricardo Vogt, born in Rio Grande do Sul, Brazil, is a genuine prodigy in the art of music. His musical talents became visible at an early age, and at the age of 9 was awarded the first prize at the Traga Sua Musica para o Magic World Festival for his original composition. A singer in his own right, Vogt also became the lead vocalist for the Cassino Orchestra Show Band in 2000. Soon after, Ricardo made his way to the United States where he attended the Berklee College of Music in Boston, MA. Ricardo Vogt has become an endorser for Godin Guitars and a member of the Eliane Elias Quartet (2007) and Esperanza Spalding Quartet (2008).

In 2009 Vogt was invite to perform for American President Barack Obama, and Vogt is also the recipient of three Grammy Awards.

Visit our post for information, photos, and videos of Ricardo Vogt and Veronica Nunes performing at Jimmy Hornet.