From Australia – Blues to Roots 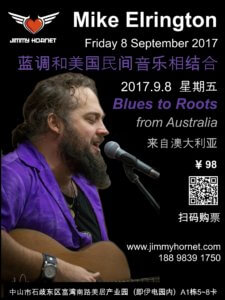 Standing at almost two metres tall, delivering his signature, gut-wrenching vocals like an instrument all its own, very few people forget a Mike Elrington performance. The commitment to his live shows and the well-earned reputation for leaving nothing behind but sweat has seen him invited to perform at some of Australia’s finest festivals.

The past few years have been exciting for Elrington; signing international publishing and management deals, receiving national airplay on Australian TV institution Neighbours (with his song Believe), performing in NZ, the US and the UK, and the recent release to US college radio of latest album Two Lucky Stars which has gained airplay across a number of states.

The big man of Australian blues music has crammed a stack into his 30 plus years so far, but the best surely lies on the horizon for this likable and talented singer/songwriter and a terrific performer.

Visit our post for more information, photos, and video of Mike Elrington performing at Jimmy Hornet.