Is something missing Kurt?

It seemed there was no-one remaining to clear customs as we waited to collect Kurt Gentle from the Zhongshan Ferry Terminal. Finally, we saw his dreads bouncing and eyes smiling and all was well…..until we realized he was without a guitar!

Always relaxed, Kurt explained his guitar hadn’t made it onto the flight from Australia to Hong Kong, however, Qantas assured him it would be delivered to his door the following day. Fortunately, after an anxious afternoon, it turned up just in time for sound check.

Kurt Gentle first played for Anthea Palmer (Jimmy Hornet Founder) at her venue  The Chandelier Room in Melbourne, Australia when he was just 17 years old. The skill with which Kurt played even at this young age made him stand out amongst the Singer-Songwriter community.

Kurt had been living and playing in the USA, and happily was able to plan a China stopover on his way to visit Australia. 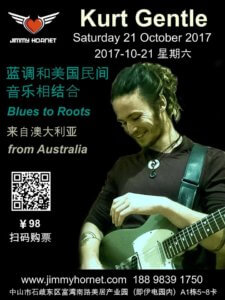 One of Melbourne’s most loved singer-songwriters, Kurt is a seasoned, though young, solo musician amongst the Australian Blues-Roots scene. Gracing the stage with humility, Kurt delivers a beautifully crafted set full of high energy stomp, overdriven lap slide guitar, old school finger style shred, all within an atmosphere of soul-baring songwriting. Kurt plays a variety of instruments that he blends into his unique sound – numerous guitars, harmonica, stomp box, tambourine, and vocals.

Kurt will get your toes tapping with his stomp and bold, overdriven riffs. But he will also strip back the layers to sing from his heart, where his lyrics are clearly formed.

Kurt Gentle at The Chandelier Room 2014

Throughout his first few years as a performer, he completed numerous self-managed, interstate tours around the country, and a two year signing with Boxer Records.