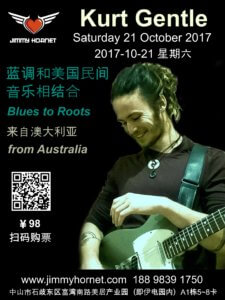 One of Melbourne’s most loved singer-songwriters, Kurt is a seasoned, solo musician playing within the Australian Blues-Roots scene. Gracing the stage with humility, Kurt delivers a beautifully crafted set full of high energy stomp, overdriven lap slide guitar, old school finger style shred, all within an atmosphere of soul-baring songwriting. Kurt plays a variety of instruments that he blends into his unique sound – numerous guitars, harmonica, stomp box, tambourine, and vocals.

Kurt will get your toes tapping with his stomp and bold, overdriven riffs. But he will also strip back the layers to sing from his heart, where his lyrics are clearly formed.

Throughout his first few years as a performer, he completed numerous self-managed, interstate tours around the country, and a two year signing with Boxer Records.

Kurt has now a new portfolio of tunes and has just completed the recording of his new full-length studio album ‘Heart’s Fire’. This new music sees Kurt move in a slightly different direction, playing with a band this music is heavier, has more grit and is full of excitement. Fat, overdriven riffs, with passionate vocals and the backing of incredible stomp drums that’d get your feet dancing. 2017 holds exciting and wonderful opportunities for Kurt, such as performing in the USA and Canada, the recording/release of new music, plus gigging and touring in the land down under! Big things to come!-

Visit our post for more information, photos, and videos of Kurt Gentle’s performance at Jimmy Hornet.