Blues poet, songster, writer, and actor, Doc White is a man of many talents and a teller of great stories.

Doc was a regular at The Chandelier Room in Melbourne, Australia, a venue also founded by Anthea Palmer of Jimmy Hornet.

The two stayed in close contact, and Anthea would attend Doc’s performances, both solo and with the Lowdown Hokum Orchestra, a side project for Doc which consists of foot-tappingly good-time music with a Memphis/New Orleans vibe. 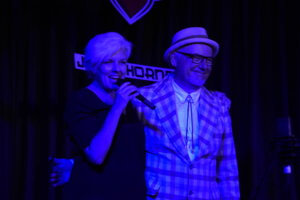 Anthea Palmer and Doc White on stage at Jimmy Hornet

Keen to spread his wings, Doc booked some solo gigs in Hong Kong and given it is just a hop, skip and jump away, he added Jimmy Hornet Zhongshan (China) to the Tour.

Doc played Jimmy Hornet Zhongshan on two occasions and was a favorite with foreigners and local Chinese alike. The second performance SOLD OUT!

Doc White is a musician, songwriter, actor, and playwright who grew up in Adelaide at a time when some of the most bizarre murders in the country were being committed. As a result of an unfortunate series of seemingly random events, a copy of Lightning Hopkins first Arhoolie record landed on his old HMV record player and the gloom was lifted. A lifelong and, some would say, unhealthy interest in blues and true crime evolved that has remained to this day.

Doc plays country blues like the devil (who was an early fan) and is one of the few modern blues artists to adopt the mandolin, despite it being an instrument that is nearly impossible to tune.  Doc still holds the record for the Glenelg to Somerton ocean swim he set in 1971 due to the race being abandoned in 1972. 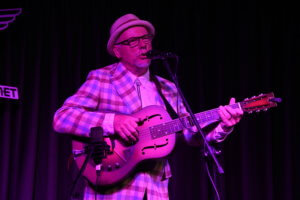 Doc has appeared at major festivals and tours Australia solo with his band Si Compadres. He also created the blues and burlesque show The Lowdown Hokum Orchestra and Burlesque Revue.

Doc’s music has been played on ABC Radio and he has been featured on The Planet and in Rhythms Magazine.