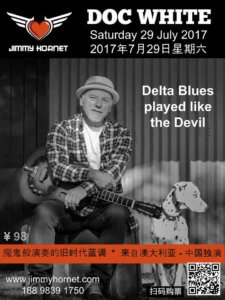 From Australia – only China Show

Doc first heard the Blues when a copy of Lightning Hopkins first record landed on his old HMV record player. It triggered a lifelong interest. Doc is one of the few modern blues artists to adopt the mandolin, despite it being an instrument that is nearly impossible to tune.

Doc has appeared at major festivals and tours throughout Australia.. He is also the creator of the blues and burlesque show “The Lowdown Hokum Orchestra and Burlesque Revue.”

Doc’s music has been played on ABC Radio and he has been featured on “The Planet” and in “Rhythms Magazine.”

Doc was awarded Song for the Year (2004) by the Blues Appreciation Society.

Visit our post for more information, photos, and video of Doc White performing at Jimmy Hornet.