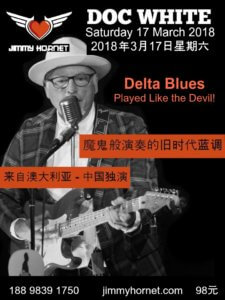 Doc White is a musician, songwriter, actor and playwright who grew up in Adelaide at a time when some of the most bizarre murders in the country were being committed. As a result of an unfortunate series of seemingly random events, a copy of Lightning Hopkins first Arhoolie record landed on his old HMV record player and the gloom was lifted. A lifelong and, some would say, unhealthy interest in blues and true crime evolved that has remained to this day.

Doc plays country blues like the devil (who was an early fan) and is one of the few modern blues artists to adopt the mandolin, despite it being an instrument that is nearly impossible to tune.  Doc still holds the record for the Glenelg to Somerton ocean swim he set in 1971 due to the race being abandoned in 1972.

Doc has appeared at major festivals and tours Australia solo with his band Si Compadres. He also created the blues and burlesque show The Lowdown Hokum Orchestra and Burlesque Revue.

Doc’s music has been played on ABC Radio and he has been featured on The Planet and in Rhythms Magazine.

Visit our post for more information, photos, and video of Doc White performing at Jimmy Hornet.