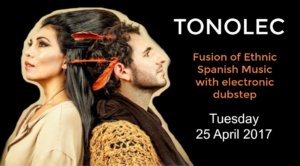 Tonolec is a musical duo from northern Argentina, comprised of singer Charo Bogarín and composer Diego Pérez, who for more than a decade have developed a musical fusion of electronic music with ethnic chants from the Toba and Guaraní mbya tribes.

Their compositions emphasize the mystique and spirit of native tribes as well as their country ́s musical identity. They are considered the new sound of the national music scene.

TONOLEC aims to create music that is bound to their origins by reflecting on their roots, on the places where they grew up. From TONOLEC, emerges a harmonious and unique sound of both ancestral and contemporary influences.

The traditional chants were taught to them by the ancient teachers of the Toba community and the Mbya Guaraní children ́s choir from Misiones province in northern Argentina.

Author and composer. A singer who plays the charango and bass drum. The music of Tonolec is impregnated with the powerful and intimate voice of Charo where gracefully combines her classical lyric technique with the guttural modes of the native songs of her region.

Music producer, composer and multi-instrumentalist musician, he displays his versatility on stage accompanied by samplers, electronic sequences, guitar and keyboards.

Visit our post for more information, photos, and video of Tonolec performing at Jimmy Hornet.